Condition of engine before rebuild: It was determined by an unidentified rebuild plate that previous machining operations had been completed on the engine. On the engine was a 2bbl Bendix Stromberg carburetor with manual choke and a single point distributor. Inside, the crank had been cut .010 over and the cylinder bores were .040 over (as told by the rebuild plate). The 318 was abnormally oily and dirty, showing signs of a leaky rear main seal and bad head gaskets. Upon disassembly, the engine seemed to be well maintained and exhibited very little oil buildup throughout. The freeze plugs were siliconed into their holes, making their removal a nightmare. The intake manifold heat crossover was completely blocked with carbon buildup, and the head passages were partially clogged. All internal components were removed with ease. The only hindrance on disassembly was the crank pulley; this was solved quickly after finding the proper tool for removal (please see below). Both the camshaft and timing chain had little wear, but the chain was stretched enough to warrant its replacement.

Condition of Transmission: An extreme amount of dirt and grime existed on the transmission itself. Some leakage was prevalent out of the covers and the end assembly areas. The clutch disk had been worn down to the rivets, while the flywheel had classic signs of heat checks and wear. These heat checks were also found on the pressure plate, which had weak springs. 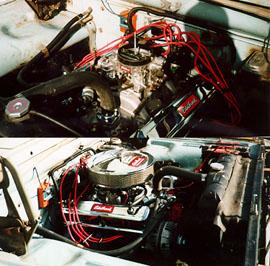 Notes on Engine Balance: On this particular LA-318 engine, the assembly including the crankshaft, rods and pistons are "internally balanced". This means that no outer harmonic damper is necessary to reduce vibration and balance the motor. Since this vehicle was manufactured in 1967, the first year for the LA-318 powerplant, Chrysler continued using internally balanced forged cranks in trucks to make the changeover more cost effective. The forged cranks and the internally balanced engine are considered "rare", and in later years Chrysler switched to the current practice of an externally balanced crank on trucks. In place of the balancer is an extended length pulley. Take care when removing this pulley, as it requires the use of a ducks foot (or four-slot) puller. Caution!! Do not use a 3-jaw pulller, hammer, screwdriver or any other device to attempt to remove the crank pulley. This pulley can only be removed by threading two long bolts into its recessed dish and using a ducks foot shaped puller to slowly remove it from the engine. Two threaded holes are present in the dish of the pulley--use these for the bolts. The trouble encountered in attempting to find a replacement for a damaged pulley was next to impossible. Although the current pulley installed is a two-groove version, the original single groove unit was bent during improper removal efforts. Nontheless, the two groove part is a stronger item, and it allows for the addition of accessories in the future if desired. A stainless steel repair sleeve was placed on the seal surface to aid in front main seal longevity.

Please Note: This page is intended as a guide for the project outlined, and is not guaranteed in any way. All info above is to the best knowledge of the author. Comments? Send in an Online Response.