The '61-'71 Dodge Truck Website
| About | Clubs | Links | Spotter's Guide | Online Response |
Concise Spotter's Guide
Spotter's guides are rarely correct when addressing '61-'71 Dodge Trucks. It is not an easy task to decipher what years have what qualities. Consequently, this page is here and will attempt to be the most correct source that exists. Please feel free to provide feedback; the old Dodge Truck hobby is certainly a "progression of knowledge" and I'm far knowing it all. One of the main reasons why I made this site is to clear up much of the confusion on the year specifications. It is a subject that certainly needs more attention.

Be sure to click the smaller images, they are examples of the trucks described.

Also, note that Dodge carried a "changes" policy throughout the production of the trucks. This policy was that no changes would be made for the sake of change. Improvements would be made as they were approved or needed. This comes from the original ideals that the Dodge Brothers had established when building automobiles in 1914.

A more in-depth review of the trucks made from '61-'71 can be found in the History section of this Website.

This was the first year of Swpetline Era trucks. Trucks made in '61 had a grille unlike that of any other year. '61 grilles were made of bright polished aluminum and were slotted from top to bottom. In this year, Dodge pirated the successful "Dart" name to add introductory flair to the truck. '61, as well as trucks made through '64 occasionally had a thin chrome strip along the main bodyline that extended across much of the bed. Street scenes are at above left.
'62 thru Early-'65 Trucks

Only one year into production, Dodge made a significant change to the style of the trucks. Grilles on '62 trucks were now made from stamped steel, and possessed thicker, tougher looking cross-bars. It's easy to spot any '61-Early '65 Dodge truck since they have four headlights, unlike any of the trucks manufactured thereafter. For the most part, the change in early '65 was the result of running changes, rather than changes done on a strictly "year by year basis". The second street scene above is a shot of a Tradesman, which was simply a Dodge with a different and more "Job Rated" truck box in place of the pickup bed. Chrysler offered the Tradesman package on most of their light duty pickups.
'65-'67 Trucks

The most confusing part of these years (and of all Dodge truck year specs) is the year of '67. Sometime in the '67 model year, the door handles were changed to a push-button style like that found on Chrysler cars of the era. The handle it replaced was a lever type made from stamped and formed sheetmetal. The new push-button type was a cast metal part, and was chromed. Generally speaking, one can consider trucks with the push-button handles and the '65-'67 grille as a '67. It is unknown when Chrysler changed the handles over, but from research and ownership of '67 trucks it is believed that for the most part, 1967 Dodge Trucks came with push-button door handles, the large headlight bezel grille and styling cues that matched the trucks from '65 and '66. It is also believed that Dodge changed the grille in late '67 to (what is *generally* considered) the '68 design, so keep these facts in mind when dealing with these trucks.

1968 marked another change in Dodge Truck exterior features, especially with the addition of the Adventurer package. Overall, the exterior now featured a rectangular grille that looked thinner and more conservative. The hood was changed to fit the grille better by reshaping the front, bottom edge into a straight line. At the back of the cab, the full width rear window was now standard for improved visibility.
1969 Trucks

1969 Dodge Trucks continued to show changes in the front end department. A totally new, more stout and square hood was now the norm and would be until the end of the line. A bigger, more rounded front bumper also marked the changes made to the trucks for '69. Grilles were the same as the '68 versions. A new dashboard made its way into the interior, and it featured a full length pad along the top edge. It was designed more like a flat panel all the way across with the instruments spread across it, rather than having an isolated pod for the driver's instrumentation.
'70-'71 Trucks

The final two years marked the high point of style and design that went into the Sweptline Era Trucks. Adventurer Trucks, with their SE package as well as the other trim levels could have full length under-bodyline moulding or even side parameter chrome trim. The grille now had four long horizontal slots, although it was rectangular much like the previous design. Turn lamps were cleverly integrated into the lower slots nearest the headlamps. Plastic grille inserts held the lights in place and finished off the new look.
A-100 Vans and Trucks 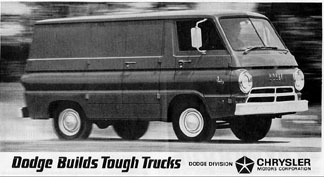 A-100 vans and pickups were one of the most signifncant truck introductions ever to come from the Chrysler Corporation. The vehicles were compact, powerful and fit well into any hard working situation. Overall, no changes were made from year to year on A-100 compact vehicles. Nonetheless, one model was added to the lineup in the year '67. This model was the A-108, which most notably was a longer version of the original A-100. Its wheelbase was 108 inches long while all other A-100 vehicles were built upon a 90 inch wheelbase. Also, A-100 bodies were modified in '66 for use on medium duty tilt cab trucks. These vehicles look like custom jobs, but Dodge actually manufactured them clear through to 1970 which was the last year for all A-100 production.