The '61-'71 Dodge Truck Website
| Pre-History | A-100's | '61-Mid '65 Trucks | '65-67 Trucks | '68-'71 Trucks |
| CSS\Adventurer Trucks | Sweptline Power Wagons | Medium/Heavy Duty Trucks |
Dodge Big Rigs
Although there were a large number of vehicles made by Dodge in low tonnage form, there were also a great deal of interesting trucks that were built specifically to handle large loads. This includes Medium Duty D-series trucks, as well as Medium Duty Low Cab Forward (LCF) trucks, L-series compact rigs and Heavy Duty L-series tilt cabs and LCF vehicles. These could be configured with an unlimited supply of options, engines and transmissions to fit various wheelbases and load requirements. Since these trucks could vary in so many ways, only a brief overview of each type is included on this page. If you would like more information on Medium and Heavy Duty Dodge Trucks, be sure to consult the book Dodge Trucks by Don Bunn.

I also highly recommend Kyle Youngblood's "OldDodges.com" website. Kyle's site is a salute to Bighorn, Medium Duty, and Heavy Duty Dodge Trucks from the 1960's and 1970's. The photos and historical information on his site are breathtaking.

Looking to repair your truck? Check out this international truck parts supplier for all your needs.
Medium-Duty D-Series Trucks

Image from Dodge Truck Sales Literature
Most of the D-series trucks we are all familiar with are of the D-100 through D-200 designation along with the occassional D-300 one ton. Any Dodge Truck rated over one ton was considered a Medium Duty Truck, and these trucks were available from D-400 to D-700 in size. Below is a chart which details the actual tonnage of each designation: In order to allow the proper proportioning for the asthetics of Medium Duty D-series trucks, filler panels, a different bumper, larger fenders and running boards were added to cover the exposed frame and make the trucks look larger. Vehicles D-300 and up were built on straight frames, leaving the engine lower in its compartment. Big D-series truck cabs were identical to Sweptline Era pickup cabs but were set up differently to accomodate the heater, accessories and chassis wiring.
Images Submitted by Steve Dreibelbis
One exception is that the D-800 Conventional cab truck was considered to be a Heavy Duty vehicle. With Dodge gasoline V8's for power and wheelbases from 133" to 197", the style and excellent features of the conventional cab trucks could be had as a heavy duty model. GVW on this truck was available as large as 29,000lbs with GCW at 55,000lbs. A `69 D-800 is shown below.

Image from Dodge Truck Sales Literature
D-series Sweptline Era truck bodies were prevalent in the Medium Duty category clear through to late 1973 when the new Life-Style Era cab was utilized in place of the older body style. These replacement Medium Duty vehicles included a front nose which looked nothing like their light duty pickup counterparts. Nonetheless, the light duty pickup cabs from the current design were utilized as they had been in preceeding years. Note: Since Dodge Medium and Heavy Duty Trucks were available with a wide range of engines, it is difficult to positively state that one engine was optional while another was standard. Use the table above as a general guide, and don't be surprised if there are minor discrepancies in the data.
A D-Series Diesel?
Shown below is a link to the spec sheet on PD-500/600 trucks, which were a D-Series Conventional Cab and Chassis with the availability of a 354ci six cylinder Perkins Diesel engine. Bet you never knew these existed! The picture shown on the linked image is obviously retouched; but, did they actually paint the hoods black as shown?

Images submitted by Aaron Arnold.
Aaron Arnold of Boerne, Texas, owns this one of a kind Perkins Diesel powered W-300. The truck is the only Perkins Diesel powered W-300 known to exist and one of a rare few W-300 Crew Cab Trucks. Although originally equipped to haul horses, the truck now has a Utiline bed on the rear of the chassis (see photos below). This unique truck has the following specifications:
Medium and Heavy Duty Low Cab Forward Trucks

Image from Dodge Truck Sales Literature
LCF trucks were available in a variety of configurations, both gasoline and diesel. Medium duty trucks covered C-500 through C-700 trucks, while heavy duty was reserved to desiginate C-900 and C-1000 trucks. These trucks all used the `56-`60 Dodge pickup cab and were fitted with a set of special front body panels. All LCF trucks were mounted on straight frames and featured swing out front panels along with the flip ip hood for total engine accessibility. The mechanic could actually stand in between the frame and front wheel to service and maintain these trucks. 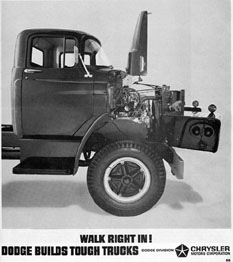 Image from The Saturday Evening Post, 6-16-65
These trucks were first built in `60, replacing cab-over "Forward Look" bodied trucks from the late fifties. Dual headlights set these earlier trucks apart from trucks built after `67, when the single headlight system was adopted with the familiar aluminum trim rings seen on A-100's and Sweptline Era Trucks from `65-`67. Gasoline or diesel engines were available, with the smallest gas engine being the Polysphere 318-2 available as standard on the C-500. Optional engines were available, including the big block 361 and 413 engines. All were installed with premium components which generally referred to the high quality of the cranks, rods, bearings, and other internals. Compression ratios were also raised as the level of each engine increased (413-2 vs 413-3, for instance).

Note: Since Dodge Medium and Heavy Duty Trucks were available with a wide range of engines, it is difficult to positively state that one engine was optional while another was standard. Use the table above as a general guide, and don't be surprised if you find minor discrepancies in the data. Diesel engines were provided by Cummins for installation into heavy duty LCF trucks. Both inline and V-type engines were available. 1963 marked the first year for the Cummins V6 engines and were just one of the many available engines for these trucks. Virtually any engine, transmission and drive axle configuration was available since these trucks were suceptible to such hard working conditions and built in far lower quantities than other Dodge vehicles. In most cases, LCF Diesel trucks are easily spotted in traffic due to their exterior mounted air cleaners and oil coolers. In some rare cases, the oil cooler was mounted within the body but the exterior air cleaner is still present.

Image from Dodge Truck Sales Literature
Primarily designated as "C" series trucks, various letters were added to the name and used to describe whether these trucks were tandem or diesel models. For instance, a CNT900 would be a C900 with tandem axles and a diesel engine. "T" stood for "tandem axles", "N" was used to designate the inline N-series Cummins diesel engine and "V" represented the V-type diesel engine.
Images submitted by Steve Dreibelbis

1975 marked the last year for production of LCF trucks sold in the domestic U.S., but a few hundred heavy duty CNT-800s and CNT-900s were exported in `76. Throughout their production run, LCF trucks were also available under the Fargo label in Canada.

Image from Dodge Truck Sales Literature
L-series Tilt cab trucks by Dodge were the most "Big Rig" like vehicles that they had ever produced. These cab-over-engine, aluminum and fiberglass bodied trucks were short and manuverable while being well designed with driver comfort and convenience a first. More specifically, the upper tilting cab body was of aluminum while the lower portions of the truck including the headlight panels and wheel surrounds were of fiberglass. A whopping 2,087 square inches of lightly tinted windshield glass allowed for excellent visibility. Large air actuated windshield wipers kept the view clear when the weather got rough. The initial purpose for building these trucks was to supply the market with a competitive cab-over, high tonnage truck.

The first year of L-Series Tilt Cab production was `64 when small trim rings surrounded the headlights. Early production trucks from 1964 can be differentiated from later production trucks by their painted trim rings. After `67, these trucks also gained the parts bin aluminum headlight trim rings from light duty `65-`67 pickups and `64-`70 A-series compacts. Cabs were available in standard or sleeper configurations, along with the choice of Cummins, Caterpillar and Detroit Diesel powerplants. Tandem or single axles could also be specified from a variety of manufacturers. Much like Dodge LCF trucks, the L-series tilt cabs were designated by letters which stood for various configurations. "N" stood for the six cylinder diesel engines, while a "V" was added for a V8 diesel. "T" still represented the fact that the truck had tandem axles, much like with LCF trucks. Cast spoke wheels were standard on these trucks with ten stud steel "Budd" wheels as optional equipment. Note: Due to the wide range of configurability in Heavy Duty Dodge Trucks, there is no simple standard to describe which engines were available. Listed in the table above are engines which are known to have been available for each truck model. Limited resources prevent a more specific description.

1974 was the last year for L-series tilt cab trucks; this was due mostly to the reasoning by Dodge management that the big truck market was no longer lucritive. In `75, they ceased production of the LCF and Big Horn trucks and settled with steady production of light and medium duty trucks.

Image from Dodge Truck Sales Literature
Shown directly above is a Dodge LNT1000 tractor with four axles (three are driven). It is pulling two trailers in tandem, having nine axles as well. If you were to count all the wheels, the grand total would make the truck a fifty wheeler. What is notable about these trucks is their design features and cab construction. In order to reduce weight, the cabs for these trucks were made out of aluminum while the lower body panels (grille and fenders) were fabricated in fiberglass. These trucks were also called Michigan "centipedes" due to the large number of axles they had.
Images Submitted by Steve Dreibelbis
| Pre-History | A-100's | '61-Mid '65 Trucks | '65-67 Trucks | '68-'71 Trucks |
| CSS\Adventurer Trucks | Sweptline Power Wagons | Medium/Heavy Duty Trucks |
| Main Page | Online Response | Part Sources | Sweptline.org Forums |